On his 41st birthday on March 31 2008. This was chosen as his blog banner picture ‘Garden of Excellence’. 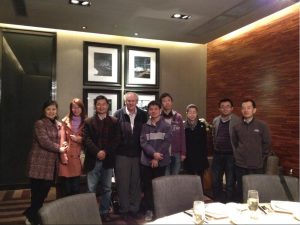 Baruch with Dominik Weiss of Imperial College visited us on March 7 2008. They were discussing with Professor Shen Chende on the radiocarbon dating of the peatbog samples collected during our Zoige trip in 2006. The result was published in Quaternary Science Reviews 28 (2009) 3303–3314, led by David Large of Nortingham University. 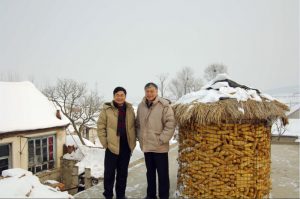 Professor Tao Shu (陶澍院士）in Peking University has been a long-term collaborator with our group since 1996. Here we were investigating rural energy use in Yantai, Shandong, on January 9 2010. The corn cobs stored in the cage would be burn for domestic heating in the winter. The black carbon, fine particulates and PAHs emissions from rural biomass burning were thought to be very importatn sources for the air pollution in North China plain. 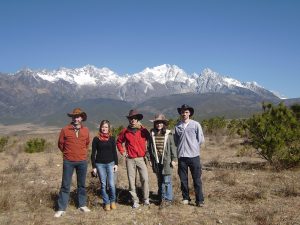 Cowbys and girls in front of Yu-Long-Xue-Shan (The Jade Dragon) in the field trip to Yunnan in April 2 2011. Greg (right 1) is an excellent young scientist working on trace inert gas isotopes. Alexandra (left 2) from Italy was working in Lancaster University with Kevin. 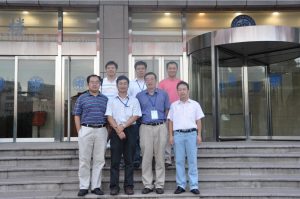 Professor Feng Jialiang (冯家良，left 1) of Shanghai University helped us a lot with levoglucosane analysis. Professor Zhigang Guo (郭志刚，front right 2) of Fudan University has been a long term collaborator of the group since 2003 when he was a professor in China Ocean University. He was also Lin Tian’s boss. Professor Wang Gehui (王格慧）is an expert in aerosol chemistry, he works in Institute of Earth and Environment of CAS in Xi’an. This was on an Aisan dust conference held on August 10 2010 in Fudan University. 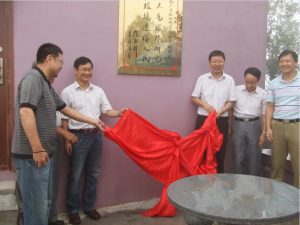 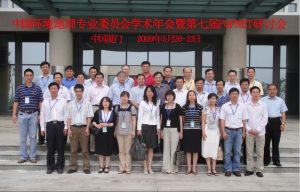 POPNET is a top saloon for POPs research in China. The annual gathering event was created in arround 2004 and has been the hall of fame for POP researchers. Here the names are (left to right): 张勇教授（厦大），徐建明教授（浙大），夏星辉教授（北师大），？， 祝凌燕教授（南开），张淑贞研究员（生态中心），麦碧娴，游静，张干，？; Row No 2 余慎研究员（城环所），陈景文教授（大连理工），孙阳昭处长（MEP POPs履约办），骆永明所长（烟台所），陶澍院士(北大），王子健先生（生态中心），彭平安院士，陈建平研究员（大连化物所），朱利中先生（浙大），赵进才院士（化学所），朱永官所长（城环所），王新明；Row No.3 冯新斌研究员，王喜龙教授（北大），？，申河清研究员（城环所），朱东强教授（南京大学），盛光遥教授（浙工大），刘维屏教授（浙大），曾永平，冉勇，？。

Field trip to setup the field experiment site in Ding-Hu-Shan. This was the first trial of us to work on POPs fate in the subtropical forest. Dr Luca Nizzetto (right 1) was working in NIVA of Norway, he has been leading the research on the air-surface exchange of POPs in forests. Luca is a close collaborator with the group since 2006. 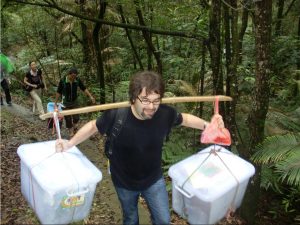 Luca is an enthusiastic tuff guy. This picture was shown on the joint workshop on environment and global change, between China and Norway, on Shanghai World Exposure.